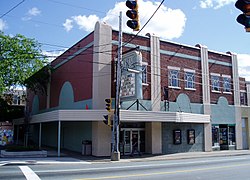 The Quinpool District refers to a commercial district of Halifax, Nova Scotia, encompassing the eastern portion of Quinpool Road as well as the streets directly north and south of it. Prominent landmarks on Quinpool Road include the Holiday Inn, the Oxford Theatre, and an eclectic variety of local businesses, including many popular Chinese and Greek restaurants.

Quinpool Road runs from the Armdale Rotary through Connaught Avenue, terminating at what is known as the Willow Tree, on Robie Street - an unusual five-way intersection named for the prominent tree that once grew in the median. The street is commercialised from Connaught Ave to the Willow Tree.

While the street is an important commercial district in Halifax, it also forms a major boundary between the city's working class North End and wealthier South End, both physically and socially. Quinpool is also the heart of the city's middle class West End neighbourhood. The area was also home to two longtime rival high schools, Queen Elizabeth High School and St. Patrick's High School until their merger as Citadel High School in September 2007. St. Patrick's High School has since been renamed the Quinpool Education Centre, hosting a number of educational programs and social services.