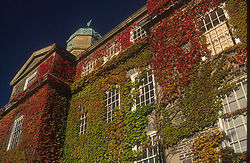 The South End is a region of Halifax Regional Municipality, located on the southern half of the Halifax Peninsula in Halifax's urban centre. Quinpool Road is increasingly considered to be an arbitrary border between the South and North Ends, though Quinpool Road is also a part of the West End, and is home, for example, to the West End United Church.

The historic South End of colonial Halifax was originally bounded on the south by "South Street", that being the few blocks located south of Citadel Hill, just as the North End comprised the area bounded on the north by "North Street". The areas south of South Street and west of the South Common was largely farmland and mixed forest which led to the development of large estates to take advantage of their proximity to the city and garrison.

Over time, neighbourhoods began to develop outside the original city boundary and were amalgamated into the city proper. One of Halifax's largest megaprojects in history saw the completion in 1918 of a major railway line through a deep rock cut for several kilometres parallelling the shore of the Northwest Arm to serve a new railway station at the south end of the city's business district. The new railway line had been under construction by the Intercolonial Railway and later Canadian Government Railways at the time of the Halifax Explosion, which devastated the city's North Street station; the new railway line through the South End was rushed into completion to accommodate the unexpected disaster. One result of the building of this railway line has been to geographically isolate parts of the peninsula, creating opportunities for wealthy and exclusive neighbourhoods to develop. Another legacy of the blasting work created during the construction of the South End railway cut was the infilling of parts of Halifax Harbour and Bedford Basin to create railway yards and freight and passenger ship docks.

The South End has become the most prosperous region of Halifax, with a primarily middle class demographic. There is also a high student population, owing to the presence of Dalhousie University, Saint Mary's University, University of King's College, and the Atlantic School of Theology.

Areas of the South End include the downtown core, Point Pleasant Park, the Halifax Ocean Terminal and South End Container Terminal. It borders the eastern shore of the Northwest Arm.